Sword Saints is a TRPG about Saints, demi-immortal warriors awakening to their true selves after a lifetime of doubt and toil in The Cage, a massive ur-arcology slowly consuming the world. The Cage is never finished, constantly building higher and deeper, heedlessly destroying the world that supports it. The Cage is ruled by the villainous autarchs- the "self-ruling class"- and built by the ess classes, whose blood and agony serve (sometimes quite literally) to fuel The Cage’s expansion.

What Mask Do You Wear?

Players take on the role of Saints, esses who've come to philosophical and personal crossroads, realized the poisonous nature of The Cage, and faced a choice: Ignore their revelations about who they could become and how life could work, or do the heartbreaking work of becoming their True Selves.

Saints are transformed by their personal struggles and realizations into an eternal being. Your form is incomprehensible to The Cage, whose oppressive logic dictates certain “immutable” physical laws. To prevent contaminating your perfect self with this world’s smallness, you don a Mask: a physical form of your design and choosing, not one assigned to you by the vagaries of birth, physics, and life's many terrible surprises.

Become Your True Self

Build your Saint by claiming a Mask and a Sword, create your Saint's Signifiers and Sorrows. Wield potent and esoteric Dream powers and combat arts in your battle against The Cage and its autarch rulers. Collect memories of your adventures and extract mementos from them- the Dreaming essence of your experiences- to become more powerful. While your Saint is theoretically eternal, their Masks are mortal. When one is shattered, you must let some of your memories fade in order to return to the world. In this fashion, your character is forever growing and changing, but not stuck in an endless arms race of arbitrarily higher and higher stats.

The files available in this edition are available in a variety of sizes and DPI quality levels. When reading the book on a desktop or laptop computer I'd suggest the 300 DPI versions (they look great), but I'd stick with the 72 or 144 DPI versions when on a mobile device (they'll load a lot smoother and are much smaller files). Ove also got a plain google doc export option at the bottom of the list in case you want a version of the rules with a simpler layout.

The index is still in construction - it's a bit slow-going extracting the outline and cross-references I need to make the index actually helpful. I'll put out a devpost when the indexed version is uploaded and available for download.

Hit me up on twitter if you have any questions or just wanna chat about it (@gahostan)! Please remember to leave a review if you have time and/or thoughts! <3

In order to download this game you must purchase it at or above the minimum price of $12 USD. You will get access to the following files:

Hi, I'm interested in Sword Saints, but I'm unsure on what the differences between this one and the Sword Saints: Neology are. Is this effectively the original setting, and Neology is more of a spiritual successor with enhanced mechanics and a more focused perspective on technocrats and the like? If I'm interested in a more fantastical (less scifi/modern) approach, would this version be a better fit?

So the original release is a d10-based system that I designed specifically for it, while Neology uses an adaptation of my game Superfantasy, which is based around d6 pools and creative/narrative use of power sets.

The Sword Saints: Neology files contain a book which is more or less just the rules, character options, and enemies, and a separate file containing the setting info. If you wanted a system designed for more flexible setting-building (i.e. as you suggested more high fantasy and less science fantasy), I'd venture to say Neology would probably be the better choice.

The original Sword Saints is more of a self-contained product, and the fact that Neology is split into two books could help you to separate out stuff you aren't as interested in with regards to the setting.

Also, Superfantasy is- as the name suggests- built for telling pop fantasy stories, and may be worth checking out as well.

Hello, I love this game, it absolutely rules! I did notice one thing, though, there's some missing text for the Bladed Flower in the pdf! It's still there and accessible in the google sheet version at least, but I thought I should mention it. 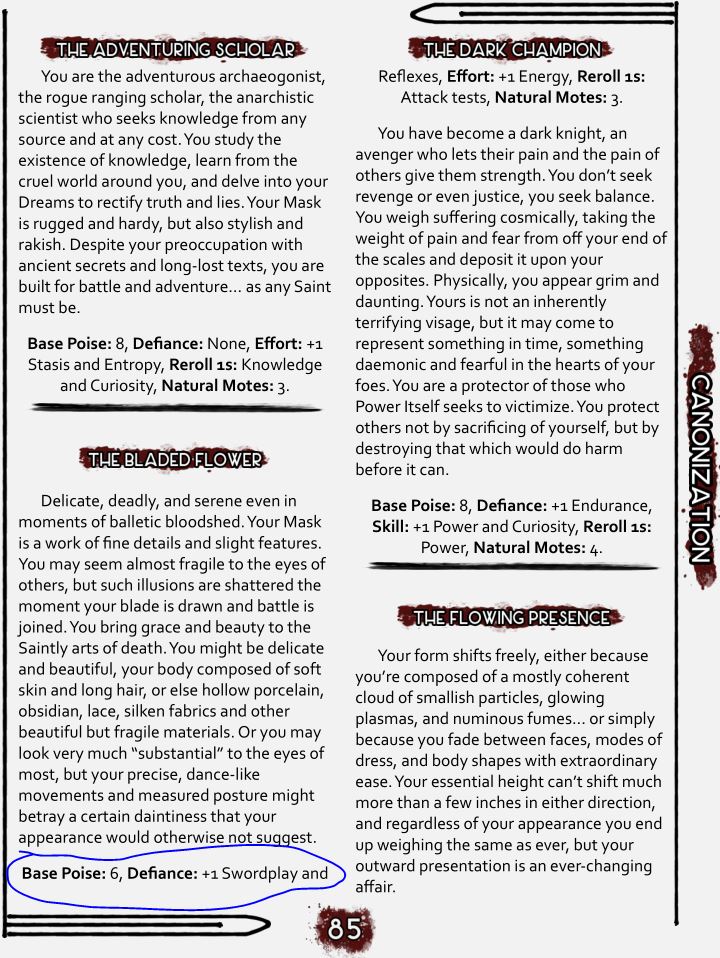 Thank you for pointing that out! I'll see if I can get it fixed and uploaded this weekend. 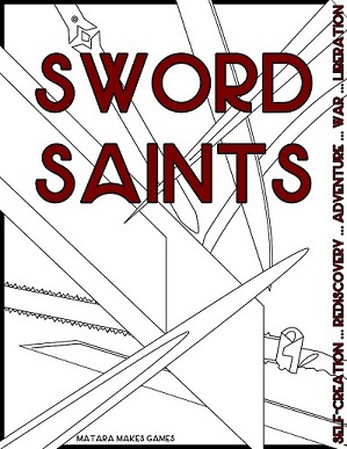 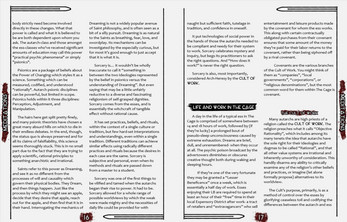 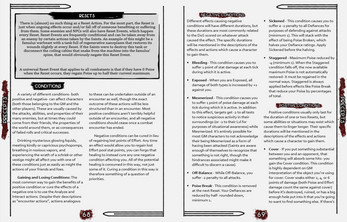 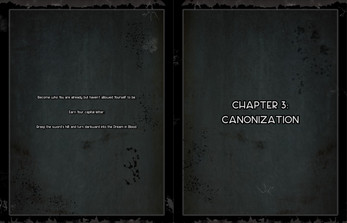