Reject Their Fantasies & Substitute Your Own

Project Animus brings you roleplaying in realms beyond fantasy. This game was created as a unofficial spiritual successor to an older game of heroic fantasy, bringing that game's soul to life with modern mechanics and structures.

This book contains everything you need to create stories of heroic adventure outside of the limits of dank, depressing dungeons and ancient, grumpy dragons. Let your mind fly where it will, create worlds wonderful and strange, tell stories of empowerment and heroic revolution.

Many Paths to Power

Project Animus gives you an open ended character creation framework with the ability to pursue one or more of the game's 4 mechanically distinct types of supernatural powers:

Characters have both personal and Campaign Beats they seek out in order to advance. The Beats chosen help shape the game's direction and tone alike, and can be regularly swapped out in order to re-calibrate the group's focus.

Help turn the campaign you are playing into exactly the one you want to play, and advance your character by doing so.

Without needing minis and maps! Unless you want them there, the game's combat is designed to work just fine while playing in a "Theater of the Mind" setting.

Leverage your character's strengths, manage their weaknesses, and make choices that determine the flow and pace of combat. Combat is powered by a pass-based initiative system, giving you a choice-based action economy that brings a variety of risk/reward elements to any battle.

Project Animus gives you rules for both common folk and monsters which allow you to have a template available for any sort of character or creature. Customize your creatures on the fly using the options available or use them as guidelines for creating your own customizations.

From only a few templates can spring hundreds of enemies, allies, and beasts of legend.

Later editions of the game will be made freely available to those who buy this current version, without an increased price or need to buy again.

In order to download this game you must purchase it at or above the minimum price of $20 USD. You will get access to the following files:

Support this game at or above a special price point to receive something exclusive.

Every copy of Project Animus purchased at or above the normal price will add a free community copy that someone else can take if their financial situation would prevent them from affording the game at its listed price.

If you can't afford a copy of Project Animus right now and there are community copies available, feel free to take one. No questions asked. If you can afford it, know that buying it will get both you and someone else a copy of the game.

Thanks for supporting my work and the community. I hope you enjoy Project Animus!

I noticed something in the freelancer class's trait, where it says exp. Is this a mistake?

Hello. 😊 I was wondering if there were anymore community copies available?

I'm thinking of getting This but I'm not completely sure yet. could you show me something from one of the 4 supernatural paths? Since those are one of the things the caught my interest the most 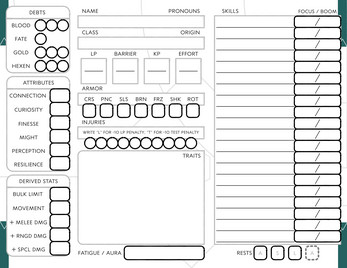 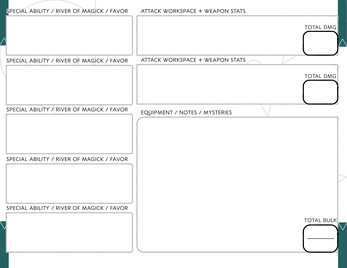 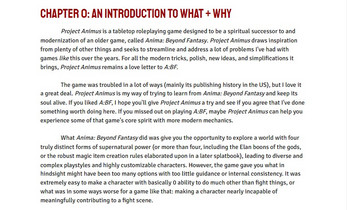