DOOM COMES TO THE DRAWN LANDS

The cartoon people of the Drawn Lands are in the midst of a slow-rolling apocalypse. The twelve worlds have been all but utterly consumed by a variety of different nightmarish forces of Corruption, leaving only Zerfaln, the Faltering Realm. Once the hub of the worlds, where each could meet and trade, this crossroads kingdom is now the last realm left standing.

Your characters are scourged vagabonds in a doomed world well past the point of no return. What will you do with the time you have left? Scrabble for treasures (for all the good it will do you), push back against the tide of Corruption by defeating the Anchors (you only delay the inevitable), struggle to survive in a dying world (you might just outlive it).

YOUR CARTOON, YOUR APOCALYPSE

Make a character in one of the six available classes. The game uses MÖRK BORG's flyweight system (with a couple of minor tweaks) to make everything from character creation to combat move quick and dirty. Master powers both Cute and Corrupt, witness Spillsight Truths, wield Items of Princessly Power, and find power in your Eternal Sufferings.

The five forces of Corruption were brought about by the greed, negligence, and apathy of the people. They are not divine retribution, but the just desserts of the evil actions of mortals. Small comfort this, to those who must suffer for the actions and inactions of others.

THE AKRYLINE SOLIDITUDE - A waning faith whose plan to survive the apocalypse turned out to be transforming the poor into plastic statues while the wealthy and powerful become immortal.

THE EMPTY VAULT - A mysterious force of oblivion, capable of manifesting anywhere and snatching away both concepts and concrete objects. People, towns, language itself disappears into its piercing white void.

THE KALLOPHAGE - The plague that eats beauty spreads across the Drawn Lands as a festering fungal carpet, rotting and twisting all and leaving nothing but mold-covered cartoon skeletons.

THE SCHISMATA - The manifestation of punishment, judgement, change, and destruction. The Schismata knows what will hurt most and destroys you in all the ways it can to maximize your suffering.

THE SPILL - At the end of time, the Spill has filled in all cracks and voids. All is Spill. Like any good liquid, it now follows the path of least resistance, pouring itself backwards through time to drown out all things in all times.

1. This game works best if you already own a copy of MÖRK BORG. Though the basic rules are available online for free (link in the PDF of this game), some stuff is left out of those rules. This is a HACK of MÖRK BORG and as such doesn't reproduce any rules from that book that the company (Stockholm Kartel, Fria Ligan) hasn't chosen to make freely available on their own site. I have written some alternate tables for gear and equipment that you can use to make characters, which follow similar guidelines to those used in the base game's creation tables.

2. The file is currently a straightforward black-and-white google doc export. I'm working on a full graphic edition with some artwork, which will hopefully manifest in the next few months.

3. The rules text is subject to change as playtesting, proofreading, and editing passes commence. I'll release devlogs when I make changes.

4. I'm submitting this hack to the MÖRK BORG CULT program, which if accepted will mean a more official release from the folx at MÖRK BORG. It's a bit out of the CULT's wheelhouse, they specifically say they prefer short punchy supplements like fun tables and bullet points, but maybe I'll get lucky!

CUTE BORG is an independent production by matara and is not affiliated with Ockult Örtmästare Games or Stockholm Kartell. 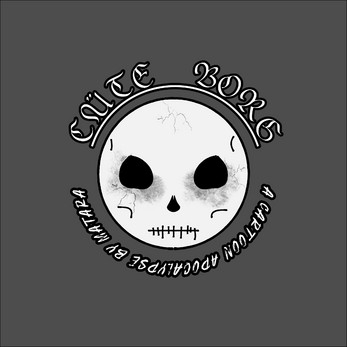