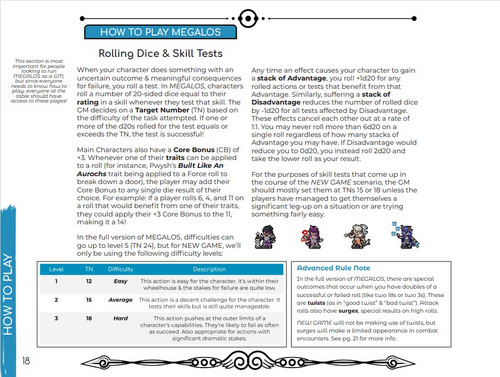 Had a really good round of feedback from some folks playing MEGALOS: NEW GAME that has led to yet another round of edits, tweaks, and revamps. Most of this is tightening screws, but they're screws that were in need of tightening for a long time, and the playtesting just helped point out where the rattling sound was coming from. Some of this stuff has been brewing for a bit, and some of it is just straight-up changes I already made in the most up-to-date private design docs and I'm rolling out first here in NEW GAME.

These changes (and others) may get tweaked here and there by the time MGLS:NG+ comes out, and even more changes will almost certainly be introduced by the time the full version is ready for release.

For now, MEGALOS: NEW GAME+ is in the works as a follow-up to this quick-start scenario, which will introduce players to systems like advancement, monstrosity and elite enemies, telegraph tokens, and more. Please look forward to it! :D

Edit: I also added a justified version of the document. This makes it look a little better (to me), but I've had a couple friends tell me it's harder for them to read so I'm leaving both up instead of replacing it. :3